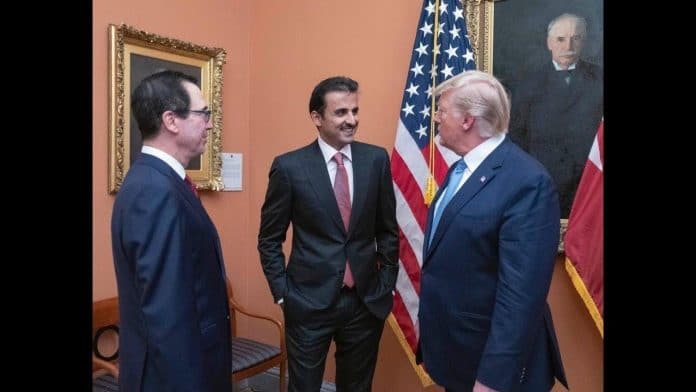 The emir of Qatar, Tamim bin Hamad Al Thani, has paid president Donald Trump a visit yesterday, 9th of July, in Washington which raised lots of questions about its purpose.

This visit comes at a critical time as it becomes more tense between the U.S and Iran. Lately, U.S has been applying more sanctions on Tehran and it’s known that the Qatari-Iranian relations are one of the strongest ones in the middle east.

Some reports claim that Tamim’s visit is all about interceding for Iran because the sanctions put on Tehran will for sure affect Qatar in a way or another as the two countries, Iran and Qatar, are relying very much on each other Economically and militarily.

Apparently, President Trump does not like that Qatar is supporting Iran despite the relatively good relations between Doha and Washington. The U.S has a military base in Qatar which was expanded and developed lately by Doha itself by the order of Tamim which may indicate how Qatar is trying its best to gain Trump’s satisfaction which may serve its interests in the gulf region.

It’s worth mentioning that the American congress considers the Qatari support for some terrorist groups, putting this beside Tamim’s support for Iran and the matter is somehow unacceptable for Washington.

Despite all of the above, let’s not forget that US needs these Qatari investments which are offered by Tamim as well as Tamim needs the US support. And it may all be a part of a huge economic plan to gain some advantages in the gulf region.

Qatar has been under a diplomatic and economic blockade since June 2017, when the United Arab Emirates, Saudi Arabia, Egypt, and Bahrain, among others, cut off diplomatic relations and communication channels with Doha, accusing it of supporting terrorism and interfering in their internal affairs.

The Qatari government has repeatedly denied all the charges related to terrorism, saying that they came out of jealousy of its economic success. Trump has been trying to play a mediating role and reconcile Washington’s allies, however without apparent success.