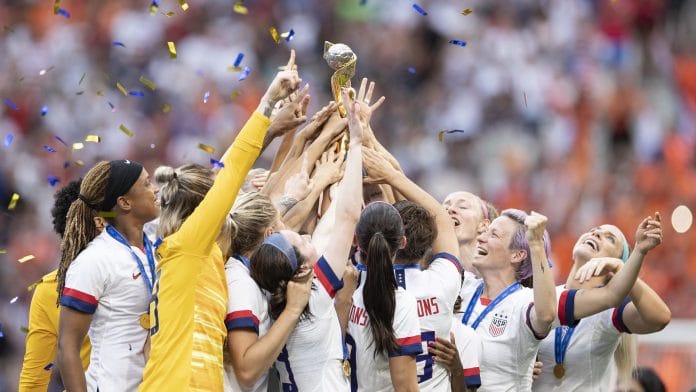 A US senator introduced a bill Tuesday that would prevent the use of federal funding for the 2026 men’s World Cup until the US Soccer Federation agrees to equal pay for the women’s and men’s teams as the BuzzFeed News reported.

Sen. Joe Manchin, a West Virginia Democrat offered this bill which would prohibit the use of federal funds that would otherwise be provided to support host cities, local and state organizations, US Soccer, CONCACAF, and FIFA when the US cohosts the men’s World Cup in 2026.

The US players are fighting for equal pay and investment in the women’s game specially after the women won the women world cup few days ago as they beat Netherlands 2-0 in France.

Last March, 28 players sued the federation for discrimination, accusing the governing body of shortchanging them in pay and working conditions in comparison to the men’s team, which by the way did not qualify for the men’s World Cup last year.

In Lyon, France, right after the game ended, the crowds started to chant loudly “Equal pay”.  The crowd also later booed as FIFA President Gianni Infantino arrived onto the field to present the trophy.

As the tournament was going on, a lot of lawmakers and presidential hopefuls have voiced support for the women’s team, saying the players should be paid the same amount as, if not more than, the men.

Gillibrand told in an interview with yahoo finance: “I think they should certainly [receive] equal pay for equal work. And since they are winning and have won and have more goals and more viewers, they really should be paid not only as much as the men, but perhaps more.”

More than 50 members of Congress wrote a letter to the president of US Soccer last week calling on the federation to fix inequities in pay, publicity, and investment for the women’s game.