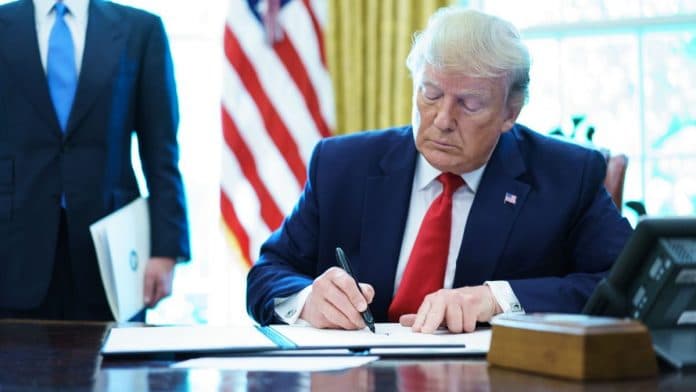 President Trump hit Iran back on Monday by imposing economic sanctions against Supreme Leader Ayatollah Ali Khamenei and his partners.

“Today’s action follows a series of aggressive behaviors by the Iranian regime in recent weeks including shooting down a U.S. drone,” the president said in the Oval Office, calling Khamenei “responsible for the hostile conduct of the regime.”

Trump said the sanctions will deny the Supreme Leader, the cabinet of the Supreme Leader and those closely associated with him and the office access to important economic resources and aid. Treasury Secretary Steven Mnuchin told journalists in the White House briefing room Monday that the sanctions “literally lock up billions of dollars in assets.”

In a news release, the Treasury Department said that any overseas financial institution that knowingly promotes an important financial transaction could be cut off from the U.S. financial system for entities named under this Executive Order.

In the wake of the newly announced sanctions, it was verified that a cyberattack against Iran was also carried out by the U.S. military last Thursday, even as the president nixed proposals for air strikes in reaction to an American drone’s destruction.

Sources have said that the U.S. Cyber Command initiated the cyber attack targeting the Iranian intelligence and radar facilities.

Iran closed down some of its army radar locations around the time that the United States was about to launch retaliatory strikes. It is not evident whether the cyberattack switched those radar areas off or whether Iran deliberately closed them off in anticipation of the attack.

The shoot-down of the drone was just the latest flare-up in the region connected to Iran. Six oil tankers have been attacked in the Gulf of Oman in past few weeks, which the U.S. and allies blame on Iran.

How Much Does America Really Need Huawei?