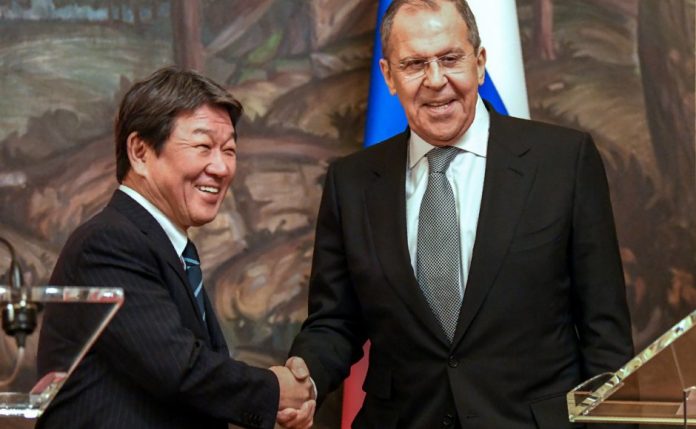 Russia and Japan’s foreign ministers met on Thursday to try and find a solution to a territorial dispute that has prevented them from signing a formal WWII peace treaty.

The Soviet Union seized the strategically located volcanic archipelago north of Japan’s Hokkaido in the final days of World War II and has maintained a military presence there ever since.

“The talks were constructive and substantial,” said Lavrov after a meeting with his Japanese counterpart in Moscow.

Atsushi Kaifu, a spokesman from Japan’s foreign ministry, said the discussions lasted for about five hours and focused on the peace treaty.

“It was an intense and fruitful discussion,” he said, adding, the foreign ministers would meet again on the sidelines of the Munich Security Conference in February.

Called the Kuril islands by Russia and the Northern Territories by Japan, talks to resolve the disputed territory stalled for decades due to Japan’s claim to the four strategic islands seized by the Soviet army in the final days of the war.

The islands’ current population is around 20,000 people.

Russia has had military bases on the archipelago since WWII and has deployed missile systems on the islands.

President Vladimir Putin and Japanese Prime Minister Shinzo Abe have met many times to try to find a way to break the impasse.

The pair have discussed joint economic activity in the region.

“The most important thing is that we want to find a solution,” Putin said on Thursday during his annual press conference, praising “trusting relations” with Tokyo.

But he questioned if a solution could be found to appease public opinion in both countries. © Agence France-Presse

George Floyd: Videos of police brutality during protests shock US