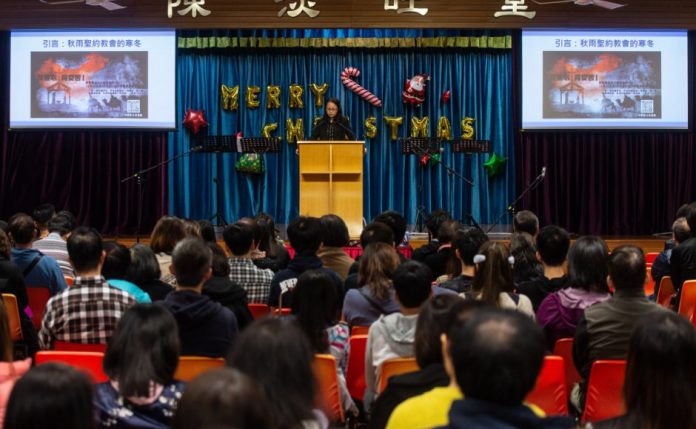 China on Monday jailed the leader of an unofficial Protestant church for nine years for “incitement to subvert state power”.

Pastor Wang Yi, whose Early Rain Covenant Church was the target of a government crackdown last year, was also found guilty of “illegal business operation” by a court in Chengdu, southwest China, according to an announcement on an official court website.

Wang was detained in December 2018 in a raid by authorities in which dozens of members of his “underground church” disappeared.

China’s officially atheist government is wary of any organised movements outside its own control, including religious ones.

Protestants in the country are split between unofficial “house” or “underground” churches like the Early Rain Covenant Church, and state-sanctioned ones where Communist Party songs also feature in the order of service.

Catholics are similarly divided between unofficial churches led by bishops recognised by the Vatican and those who follow official prelates.

Wang was convicted in an open trial by a court in Chengdu, where his Early Rain Covenant Church had been based, the city’s official court website said.

The charge of inciting subversion has often been used against dissidents as a way to silence criticism of the government and the Communist Party.

Shortly before being detained, Wang wrote a post on his church’s Facebook page criticising the Chinese government for repressing Christians, saying “the Party can flourish for a while, but it cannot last forever.”

“The Party can kill my body, but it cannot kill my soul,” Wang wrote.

Patrick Poon, a Hong Kong-based researcher with Amnesty International, said Wang’s sentence would “have a chilling effect on other house churches in China.”

“The message is very clear — you will be the next Wang Yi if you don’t register and follow the Communist Party’s line on religion,” Poon told AFP.

Wang’s church was among a number of prominent “underground” churches shut down by the government in 2018 as part of a crackdown on religion, especially on followers of Islam and Christianity.

Beijing-based Zion Church, one of China’s largest “underground” Protestant churches, was banned by city authorities in September 2018 for operating without a licence after dozens of officials stormed its premises.

Earlier that year, unauthorised versions of the Bible were pulled from Chinese online retailers.

In November, politburo standing committee member Wang Yang said at a forum that Beijing should even alter religious scripture to fix “contents not in line with the progress of the times.”

Reinterpreting religious doctrines would show “religious circles’ responsibility for their own beliefs” and was in line with the “Sinicisation and modernisation of religions,” Wang said.

He said Beijing should “effectively resist the erosion by extremist thoughts and heresies” by making its own re-evaluation of religious texts.

China has faced international condemnation for rounding up an estimated one million Uighurs and other mostly Muslim ethnic minorities in internment camps in the northwestern region of Xinjiang.

An AFP investigation found in October that China’s efforts to erase minorities’ religious identity in Xinjiang have included the destruction of burial grounds where generations of Uighur families were laid to rest.

Beijing has sought to portray its crackdown in Xinjiang as a programme to combat extremism and terrorism. © by Jing Xuan TENG/Agence France-Presse

Daniel Lewis Lee: First US federal execution to go ahead after 17 years