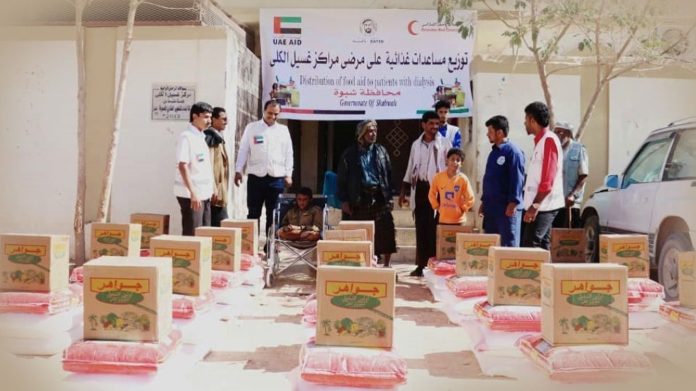 The United Arab Emirates (UAE) provided US$5.59 billion in foreign help to Yemen between April 2015 and June 2019.

The amount was used to assist rebuild the multiple industries of the nation, including essential infrastructure, and to restore health and social services according to the formal WAM news agency.

Sixty-six percent of this figure came to construction initiatives, while 34 percent came to humanitarian aid.

The information also disclosed that a large part of the assistance was channeled through global organizations.

It worth mentioning that the funds also helped 11,4 million Yemenis to gain access to health care, 16,3 million people to receive food and 1,8 million boys and girls to receive an education.

The funds also helped to rehabilitate three airports and three seaports in Aden, Al-Mukalla and Socotra.

Meanwhile, Field volunteer teams from the Emirates Red Crescent, ERC, have arrived in the rain-affected areas to assess losses and provide assistance, in addition to draining rainwater from the streets and residential areas and providing relief and shelter to displaced people in their camps.

The ERC representative in Yemen said that the Emergency Response Campaign initiated by the UAE in Aden and the neighboring governorates is an effort that meets the country’s wise management guidelines and is an expansion of the voluntary work undertaken to assist the brotherly individuals of Yemen.

He also added that this initiative supports the attempts of local authorities to remove rainwater from the roads, as well as offering help to displaced people.

He pointed out that the ERC had provided an emergency shipment of tents and tarpaulins along with meal help to 1,850 homeless households.

In conclusion, The beneficiaries have expressed their appreciation to the UAE and the ERC for the support they have given to ease their suffering.

Tamim’s visit to Washington and what’s behind it