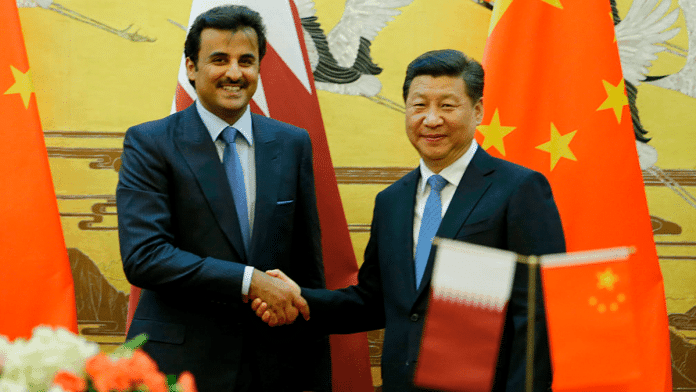 For a long time now, China has been clashing harder and harder with the US. The situation is not escalating very quickly but anyone can notice the slight escalation over time.

As Tamim bin Hamad Al Thani, the emir of Qatar is paying the US a visit tomorrow, it’s worth mentioning that he has been trying to earn China’s trust and build some solid relations with Beijing.

Five months ago, the Chinese President Xi Jinping called for a return to “unity and harmony” as he welcomed gas-rich Qatar’s emir to Beijing, amid a dispute that has seen some Arab states led by Saudi Arabia severing relations with Doha.

As the gulf countries cut relations with Qatar, Jinping stated that this conflict is to be solved via talks but he didn’t try to hide his support to Qatar and the Emir as the two of them started to improve the relations between their countries economically by signing several deals that help both Qatar and China.

But if someone is to look closely to the scene, they will figure out that Tamim is not just building these relations with china because he needs to but the hidden reason behind this is to gain a strong ally against the US because president Donald Trump announced his support to the gulf countries in the conflict with Qatar several times before.

Also, Qatar has been accused of supporting terrorist groups several times in front of the international community which might be the cause of the tomorrow visit of the Qatari Emir to the US. To clear the name of his country and to gain some support. As you can see it’s all connected not only over the past month of two but over the past few years. We can now only wait and see what is going to happen tomorrow as the visit approaches.