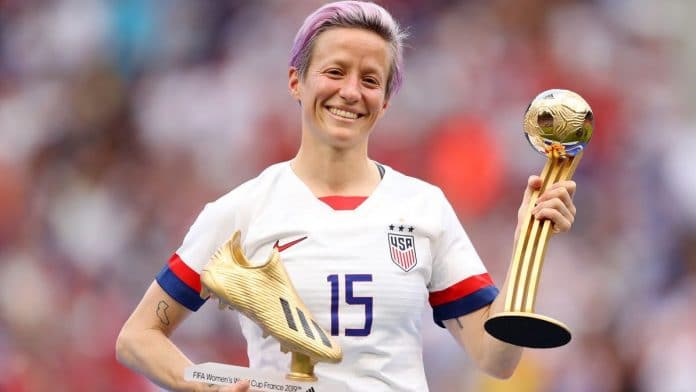 The US women football team has proven their dominance and skill by winning the final game against Netherlands after a scoreless first half.

Lyon, The French city attracted so many eyes last night watching this incredible game which ended 2-0 in the favor of the US women.

The first half of the game went scoreless, with Megan Rapinoe scoring the first goal of the game with a penalty kick at the 61 minute mark. Just before the 69-minute mark, midfielder Rose Lavelle, 24, scored the second goal.

At the end of the game, the stadium witnessed a unique event with the fans enchanting “equal pay” as a show of support for the U.S. Women’s National Team, which is in a legal fight for their pay to match that of their male counterparts.

Rapinoe was awarded the golden boot right after the game ended for the most goals scored in the shortest amount of time.

Rapinoe and teammate Alex Morgan both scored six goals and had three assists, but Rapinoe’s goals were scored in 394 minutes compared to Morgan’s 445 minutes, therefore she was awarded the golden boot.

Former Secretary of State Hillary Clinton congratulated them with a tweet, as well as first lady Melania Trump and tennis star Billie Jean King, who added a call for the women to receive equal pay to their male peers.

President Donald Trump also offered his congratulations to the women’s team on Sunday, despite sparring with some of its members over whether or not they would accept a presidential invitation to the White House.Trump Tweeted: “”Congratulations to the U.S. Women’s Soccer Team on winning the World Cup! Great and exciting play. America is proud of you all!”