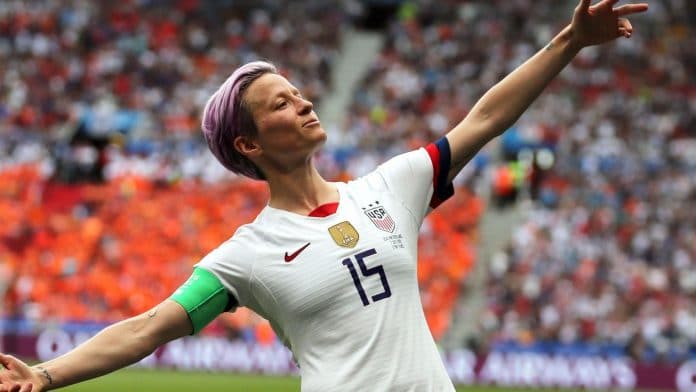 Would Rapinoe run for president

Few days ago, Megan Rapinoe, the anthem-protesting U.S. Women’s Soccer star, told MSNBC that her girlfriend, the WNBA star, Sue Bird told her that people are going to ask her to run for president of the United States eventually.

This comes right after MSNBC had Rachel Maddow host who said about Rapinoe: “I feel like you have become more and more comfortable and more and more articulate in terms of using the platform that you’ve got to say what you think ought to be happening in the world.”

The far-left is saying that Rapinoe had become more calm, more capable, more eloquent than ever, and it seems like that gets better over time.

It worth mentioning that Rapinoe said in a previous interview: “I would be protesting the national anthem as an “F you” to President Donald Trump and scoffed at a potential invite to the White House,” She also told a reporter that there’s no f***ing way that she’d be going.

Maddow joked about that she doesn’t think Rapinoe is “going to announce” a presidential run saying: ““Public Policy Polling literally did a poll today. Which was you versus Trump in a presidential contest and you beat him by a point,”

Rapinoe told Maddow that she’s not going to run for president despite her girlfriend told her that people are going to ask you to do it then they both laughed about it. Rapinoe did tell Maddow, however, that she’s “ready” for the “next thing,” in terms of her activism.

She said: “I’m excited to kind of dig in and see really where I can take this. I think that I’ve been kind of wanting that for a number of years and how do we – how do we bring it out of just sports and out of soccer and out of the things that we’ve been doing and that I’ve been doing into something way bigger? I kind of want to stop just talking about things and, like, how do we put things in action? How do we help? What do we do? What’s the best way to get people mobilized, whether that’s in voting or just getting people more educated and more plugged in to what’s happening, you know, in our politics and in our lives? And I think I’m ready for that, like, next thing. I want to be more impactful.”

Maddow Replied saying: “I think the country is ready for you.”

How the tiny Italian city of Foggia became a mafia battleground